On Saturday, April 4, 2020, Meridian was scheduled to perform at the Malaspina Theatre in Nanaimo, British Columbia. We had been excited about this as 2020 marks our eighth year working together. In addition, our colleague (and brother) Justin McGrail is going on leave and we are not sure when we'll have the opportunity to perform together again.

We were also going to premiere our latest video, Under Glass, on the big screen. Instead, we bring it to you here

Under Glass is about humanity and technology, specifically humanity living with and through technology. In the era of high-speed connectivity, smartphones, social media, and video surveillance, we are both subject and observer, witnessing our technological selves that fall and rise, and keep us forever distracted. It's hard to just be in one place. Part of us is always under observation, under scrutiny, under glass.

We could never have anticipated how this work would take on greater meaning in our current global culture, a culture kept safe by holding us at a distance, a culture reliant upon the cool glow of technology to share warmth and bring us together.

Meridian would like to acknowledge that Under Glass received funding support from a VIU Innovate Grant and represents our on-going research and creative activity. 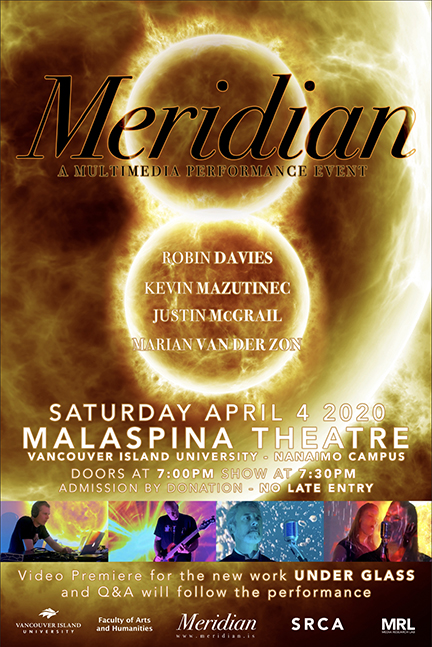